Switcher’s development is still in progress. Visually there has not changed much yet, but internally much code has been updated. This project is now also on GitHub: QtEngine_v0_1_empty

Here i am starting the engine on the actual target device for the first time. Had a small problem at the beginning but else it works awesome. Good performance overall. It needs a few seconds at the beginning, then it runs like on the desktop computer.  Here are two fotos: 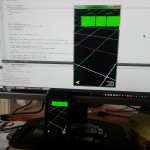 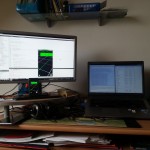 Here is the app to try it out on your device: switcher

This demo doesn’t show much, but shows the smoothness of the GUI that will be implemented soon. You can play around with the green formation. It is dragable, and scrolls back to it’s position on release. Exit/Back – button can also do it’s job already.

Next update will be functional and list the device’s tasks…