Well, it’s my third semester at university which almost ends and I study media informatics.  During those semesters i wasted some of my time on a few projects which I think deserve to be posted here… 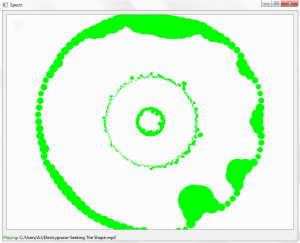 Spectre is a little music visualisation programm. It is powered by FMOD Ex sound engine and was part of a project in the media subject of my study in my second semester. I was kind of astonished how easy FMOD can be used and combined with Qt. But here is the result:

spectre.zip (little hint: if it crashes try the executable with a lower number) 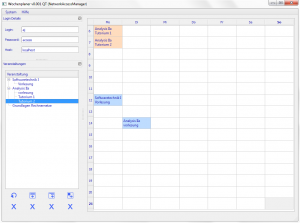 Like the title says, it should manage your weekly schedule. Some features for example are a printable schedule and a sql database. We were free to use any object orientated programming language, so i decided to use Qt for the GUI. The server is actually a simple windows console app that runs as CGI app on an apache server with a mysql database. The server is coded in Visual Studio and uses only standard windows libs and the mysql libs.

No download and no sources yet because it isnt finished.

In my spare time i try to work on the following projects:

Not much to say here. Lack of time and lazyness 😀

Switcher recieves at this moment a new sleek openGL ES only userinterface. So expect some news soon.